Mattel, via Mattel Creations, is releasing a new Masters of the Universe Origins Eternia Playset! The playset is inspired by the original Eternia playset from the original MOTU figure line. The set features the Lion’s Head Tower, flanked by a Grayskull Tower on one side, and a Snake Mountain Tower on the other. Connection the three pieces is a monorail track system, featuring three interchangeable motorized vehicles. The massive playset will stand at 3 foot tall, and 4 foot wide.

The Eternia Playset is going to be a crowdfunding campaign, which will need 5,000 backers to move forward. The campaign will begin on October 12th, and 9:00 AM PST. The set is priced at $550, and is expected to ship out by the end of March 2024. Fans who back before October 19th will get a bonus limited edition Masters of the Universe Origins King Grayskull figure.

Read on for photos and full details.

Join the Battle for Eternia! Locked in an everlasting war, this Eternia playset is swarming with action-packed features and hidden surprises. The Grayskull Tower and the Viper Tower flank the Eternia Tower as the forces of good and evil wage war. March into combat and fund the playset for the ultimate centerpiece to your MOTU collection.

At 5,000 Backers – You get the Masters of the Universe Origins Eternia Playset, an epic display that will bring your MOTU collection to life

Early Backer Bonus – When the Eternia Playset is funded, all orders received between 10/12 and 10/19 will receive the King Grayskull figure, a key to the history and mystery of Eternia

This iconic playset is the ultimate tribute to the everlasting battle between good and evil, but we can’t do it without your help. Share the crowdfund with your fellow friends, family, heroes, and villains to bring the Eternia Playset home!

Learn more about this epic display below and don’t forget to check out the FAQ!

JOIN THE BATTLE TODAY
When we first unveiled the Eternia Playset at SDCC22, the fans went nuts. Today, we’re calling on every member of the MOTU Army to join this crusade, starting 10/12 and ending 11/9, to fund the playset.

THE RACE TO 5,000
To unlock the ultimate battleground we need 5,000 backers. Keep reading more about this massive playset and why it’s full of MOTU awesomeness.

OPPOSING ARMIES
This expansive playset brings both sides of the battle for Eternia. At Grayskull Tower, you can capture He-Man’s evil foes with a trap door and opening gate. In Snake Mountain Tower, you can control the snake head to lunge and bite at any interloping heroes.

TOWER OF POWER
The middle Tower of Eternia hosts many surprises, including the Lion’s Head entryway that captures would-be intruders and the sculpted details in the moat. The pinnacle of the tower is armed with a double-barrel cannon that shoots missile projectiles.

THE CENTER OF THE CONFLICT
Inside the main tower, an elevator moves your figures up through the second and third levels. On the third level, the training room and armory has a maneuverable Horde Trooper dummy that is remotely controlled by a chair in the command center on the second level.

SURROUND THE BATTLE
This massive 3’x4’ playset is surrounded by a monorail system with a motorized tram that zips around the three towers. Attach one of three different vehicles and move your figures around the battle.

EARLYBACKER BONUS
In order to rally the troops, we created our royal Early Backer Bonus. The MOTU fans who commit before 10/19 will get a limited-edition King Grayskull figure to rule over your Ultimate Battleground Playset. 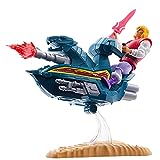 Masters of the Universe Origins Battle Skysled... $32.99
SaleBestseller No. 2 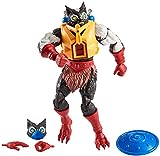 Masters of the Universe Masterverse Stinkor Action... $13.11
Bestseller No. 3 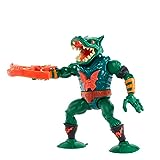 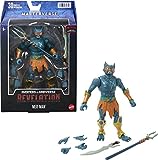 ​Masters of The Universe Masterverse Collection,... $17.98
SaleBestseller No. 5 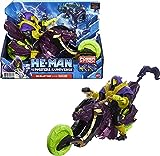 Masters of the Universe He-Man and The Action... $9.99
SaleBestseller No. 6

He-Man and the Masters of the Universe Minicomic... $28.49
SaleBestseller No. 7 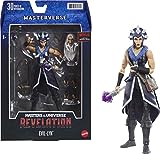 Masters of the Universe Masterverse Collection,... $12.93
Bestseller No. 8 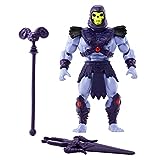