Scream Factory and NECA have released a few photos of their upcoming figure The Fog – Stevie Wayne 8″ Scale Figure. The figure is based on Adrienne Barbeau’s appearance in the 1980 film. The figure was available as a stand alone release, but sold out quickly after being announced. You can still get the figure by ordering one of the assorted bundles that are still available from Scream Factory. The current lowest price bundle is $76.97, which gets you the film in 4K UHD, Blu-Ray, a poster, and the figure. Check out the new photos after the jump. 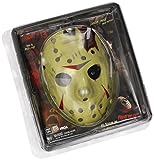