Overall
The retro Michael Myers figure comes packed in the classic plastic clamshell design. The card backer features artwork from Jason Edmiston. The figure includes two swap out portraits, an interchangeable right hand, a knife, a hammer, a syringe, and a scalpel. For those wondering, you can easily open this type of packaging. Along the edges of the card are small tabs that are heated to seal the clamshell. Simply slide a razor blade or box cutter between the two pieces of plastic and carefully cut those tabs. Move slowly and they’ll cut fairly easily, leaving the full clamshell intact.

With each new release, NECA seems to make major improvements to their retro clothed line. The fabricators are getting better at clothing that seems more natural. Where as releases from a few years ago would have almost oversized, and bulky outfits, releases now have much more form fitting clothes that scale much better. This is NECA’s second go at a Michael Myers clothed figure. Earlier this year, we took a look at the Halloween (2018) Michael Myers Clothed Figure. Comparing the two, the improvements are immediately noticeable. The cloth outfit is more natural looking here, even more so than the prototype in my opinion. There are more natural looking folds in the legs, and the wear and tear of the bullet holes works really well. Another welcome bit of news is that this figures uses NECA’s 3.0 retro body style. This body is a bit taller than the 2.0, which you can see in the comparison photo with Halloween 2018 figure. This updated body also gives much more articulation, with double jointed elbows, a ball jointed torso, and far better ankles. The joints all felt great here, with no locking or breakage issues.

Of course, the most important aspect of a Michael Myers figure is the mask. And it looks really fantastic here. The sculptor, Trevor Grove, did some great work in nailing the likeness of William Shatner (who the mask is portraying), while also making sure it looks like someone wearing a mask. The masks also feature some outstanding paint work, with subtle transitions that simulate the wear and tear the mask went through. Some of the detail work is digitally printed onto the masks. It’s really only noticeable when looking up close. There second mask featuring blood coming from the masks eye holes, to simulate the look from the end of the film. Both look equally as good, and swap out with no trouble at all. Also included with this release are a nice assortment of weapons, and s second right hand. One hand has a looser grip, made for the knife and the hammer, while the other has a grip more suited to the scalpel and syringe. All of the weapons are a nice solid feeling plastic, so here’s much less chance for warping. The two hands can be changed out with no issues.

This turned into a really solid release from NECA, and has me more excited for the upcoming Loomis and Laurie 2-Pack. With a great sculpt, solid fabric work, nice paint, and good accessories, there’s not much to dislike here. I’d say this release is highly recommended for fans of the 8″ line, or for Halloween collectors in general. Check out a selection of images below, and the full gallery after that. 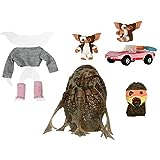