The Godzilla – 1956 Movie Poster Version 12″ Head-To-Tail Figure is available now, directly from the NECA eBay Store and the NECA Amazon Store. The figure is painted to match the one sheet poster from the US release of the original Godzilla film. It features their flapped window box packaging, and a 3D diorama display where the figure becomes part of the poster. The figure begins shipping to retailers on July 1st, and won’t hit stores until mid-July. So you can grab it almost a month early now. It’s priced at $27.99 plus shipping.

The figure measures 6″ tall and 12″ long from head to tail. It features over 30 points of articulation, including an articulated tail! The package insert doubles as a foldable backdrop that brings the one-sheet to life – Godzilla can be posed in the fold of the backdrop creating a 3D version of the poster illustration in toy form.

If you missed it, we have an early in-hand photo gallery and review of the Godzilla – 1956 Movie Poster Version. 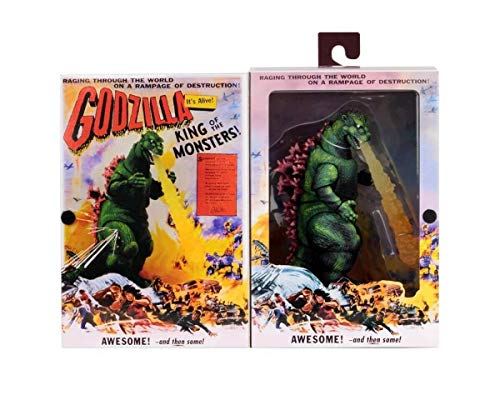